Since 2014, the average Medicare beneficiary has seen a yearly increase in the number of Medicare Advantage plans that are accessible for enrollment; in 2018 alone, the average Medicare beneficiary has access to 21 MA plans. This intense competition and the need to maximize annual bonus dollars to keep premiums low continue to drive health plans to pursue innovative approaches to member engagement and adherence improvement.

Many health plans dedicate an annual budget to Part D medication adherence programs that consist of identifying and intervening upon members who may be at risk of non-adherence to these chronic condition maintenance drugs. One large, regional health plan client has historically held medication adherence as a top priority within its Part D program. Through RxAnte, the Health Plan deploys advanced predictive analytics and direct-to-member interventions to maintain four-star medication adherence ratings across its Medicare Advantage contracts.

In 2017, this health plan and RxAnte focused on activating local retail pharmacies as key engagement points for members through the Pharmacy Incentive Program (PIP).

Described below is the approach that a health plan client and RxAnte undertook to successfully design, execute, and evaluate a Pharmacy Incentive Program in the fourth quarter of 2017.

Using the Health Plan’s data, including pharmacy and medical claims, RxAnte conducted an analysis to identify best-fit retail pharmacies based on the proportion of plan membership attributed to those pharmacies. RxAnte then determined the number of remaining members “in-play”—that is, members still able to positively impact the year-end adherence rate— attributed to these pharmacies. These analyses enabled the Health Plan and RxAnte to establish achievable population-level improvement goals for each of the three program measures.

Two pharmacies were ultimately deemed “best fits” to include in the Program due to the percentage of members attributed to those pharmacies and the number of members still in-play at the time the of PIP launch. A breakdown of attributed plan members is shown below. 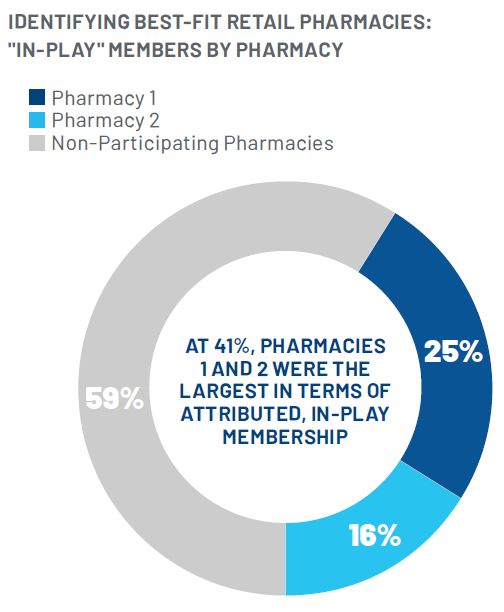 Now aware of where the majority of at-risk members filled their prescriptions each month, the Health Plan employed RxAnte’s analytics to inform the performance incentive component of the program. RxAnte identified a “baseline” year-end adherence rate for all attributed members absent additional interventions from the pharmacy, and then designed a tiered bonus system for pharmacies that demonstrated adherence improvement beyond this baseline. These tiers were established in 1% increments and bonuses were calculated at the measure level. If a participating pharmacy exceeded the predicted baseline adherence rate for a measure (rounded to the nearest 1%), they were given a predetermined performance bonus corresponding with their level of improvement. The Health Plan agreed with this approach due to the accuracy of RxAnte’s predictive analytics; by late Q3, RxAnte predicts year-end adherence rates with >90% accuracy. 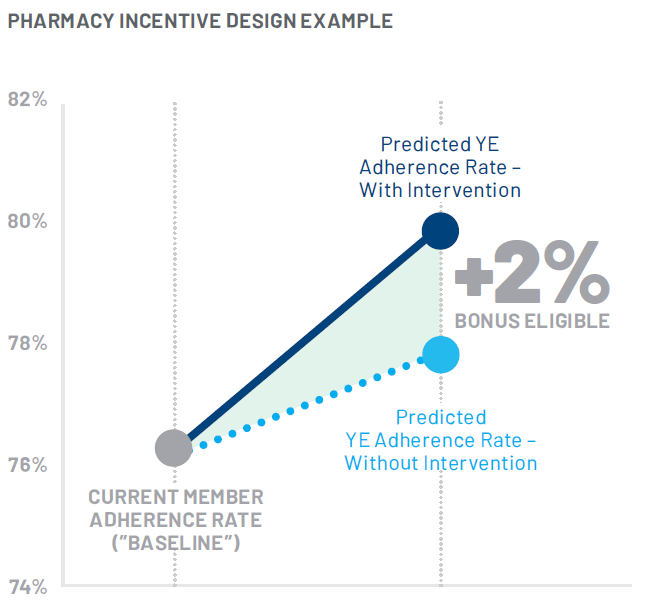 In support of the Health Plan’s pharmacy pay-for performance program, RxAnte provided a regularly updated list of members attributed to Pharmacies 1 and 2, which were then shared on a weekly basis with those participating pharmacies. These full member lists were prioritized by members with the highest risk of non-adherence based on their number of fills remaining to becoming adherent (80% PDC); with these prioritized lists, the retail pharmacies were aware of which of the attributed members were most in need of intervention (see the workflow graphic below).

Per the incentive design, each pharmacy received a base payment at the time of contracting, with the remainder of the program budget proportionately allocated by pharmacy. The additional payments received by each pharmacy were contingent upon their performance relative to the tiered bonus system, and were determined using the population of members attributed to the pharmacy at the end of the program. 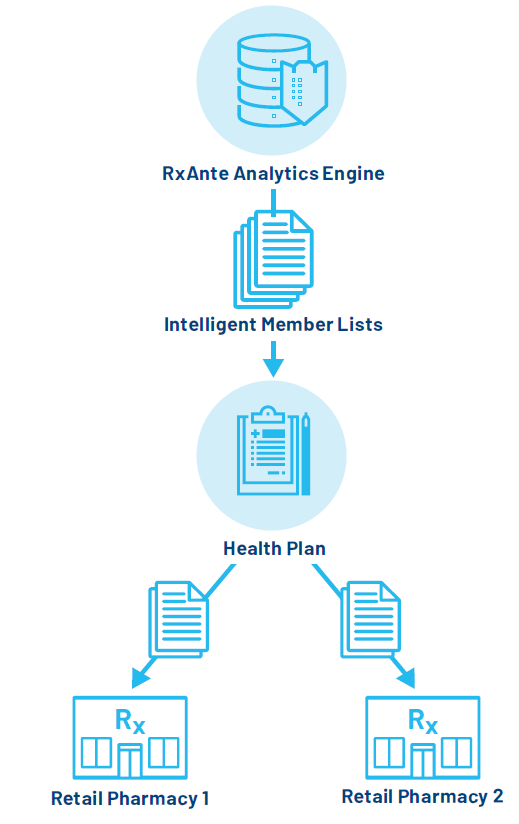 ADHERENCE LIFT AND RETURN ON INVESTMENT

With nearly 25,000 affiliated Health Plan members, Pharmacy 1 was a highly prevalent regional pharmacy with a large volume of members needed to be reached in order to attain this level of adherence lift. Ultimately, this pharmacy’s positive results were facilitated by leveraging its centralized internal call center in order to ensure timely and thorough engagement of their attributed members. 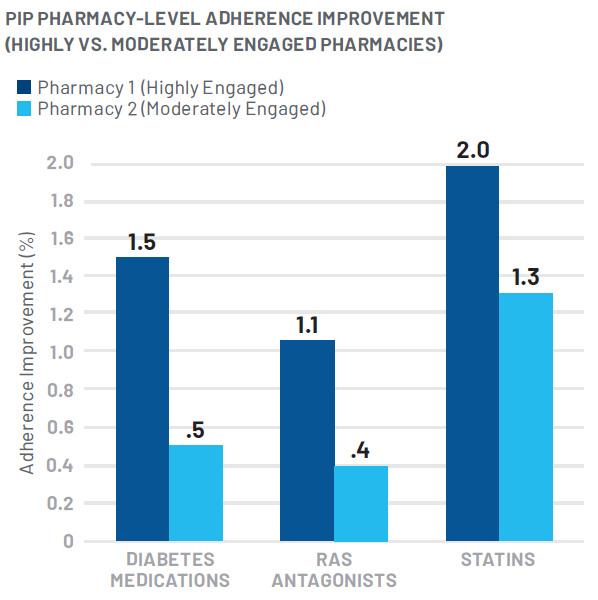 This increased medication adherence also drove an estimated $1.4 million in total medical cost offsets over a 12 month period.* In calculating program cost compared to the estimated cost savings due to improved adherence, the program ROI is estimated to be over 7:1. This ROI does not include the additional value of improving adherence rates in pursuit of maximizing Star Ratings.

Experiencing an adherence improvement among reached members and positive overall program ROI, this health plan client can now focus on scaling the program, driving even higher pharmacy engagement rates and on-boarding additional retail partners in 2018 and beyond in order to maximize adherence improvement in this intervention channel. 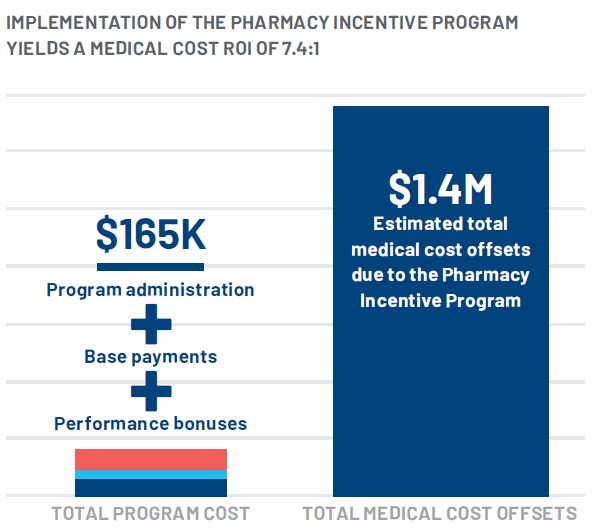 Overall adherence lift as a result of the Pharmacy Incentive Program was 1.4%. Total estimated medical cost offsets were $1.4M, or $2,437 dollars per plan member reached, over a 12-month period.

In early April, the Center for Medicaid and Medicare Services shared its Announcement for Medicare Advantage Part C and D plans, incorporating feedback solicited after an Advance Notice was issued in February 2022. Overall, not much has changed since the Advance Notice, however CMS addressed the comments issued by Medicare Advantage stakeholders like MA organizations and prescription drug plan sponsors.

The need for value-based pharmacy services

There is a strong push among physicians to transition to care models that incentivize fewer, more effective treatments. This same perspective should also be held in pharmacy. As we look to a post-pandemic healthcare system, improvements need to be made to remedy these concerns with focuses on barriers to optimal quality and cost--particularly for the medically complex and socially vulnerable.

A new approach to pharmacy is required to address the needs of medically complex members. Read a preview of our presentation at the AMCP Annual Meeting, and join us at our Science and Innovation Theater on Thursday at 11:15am to hear our latest outcomes from a 6-month study on Mosaic members.