The FDA announced a recall of RASA prescriptions in mid-2018 following concerns around carcinogenic impurities. The drug recall, followed by widespread negative press and medication switching, may have resulted in lower medication adherence among plan members that were prescribed these medications. Below is an RxAnte analysis of the impact of the 2018 RASA recalls on Medicare Advantage Prescription Drug Plan member populations and an overview of its potential effects on CMS’s RASA medication adherence Star ratings measure.

In July 2018, the U.S. Food and Drug Administration (FDA) announced the first of numerous recalls of medications containing valsartan, irbesartan, and losartan – drugs used to treat hypertension – due to a carcinogenic impurity introduced in the manufacturing process.1 The press release sparked a flurry of media reporting with headlines warning broadly of contaminated medications and cancer risk. Hypertension is a common condition, diagnosed in more than half of Medicare beneficiaries, and can lead to a heart attack or stroke when inadequately treated.2 In line with similar disruption analyses relating to natural disasters (see our section on “Extreme and Uncontrollable Circumstances” in this blog post), we hypothesized that patients on antihypertensive drug regimens affected by the recalls and negative press may have experienced reduced medication adherence. If population adherence impacts are significant, we could expect CMS to consider new adjustments to Star ratings, as they did following recent natural disaster investigations.

To evaluate the scope of the recall impact and its effect on year-end adherence rates, we examined two years of pharmacy claims data from Medicare Advantage and standalone Prescription Drug Plans covering over 1.4 million hypertensive patients in 2017 and 2018. Patients were included in the study if they met qualifying guidelines for the PQA adherence measure for Renin Angiotensin System Antagonists (RASA; NQF #0541) in either study period year. From this, we created two cohorts: (1) patients whose first prescription fill was for a listed recall drug, and (2) patients who did not index on (i.e., initially fill) a recalled drug.3 We compared year-over-year adherence rates between these groups to estimate an unadjusted adherence impact for the 2018 year.

In 2018, 6.4% of patients filled their first prescription for a hypertension medication that was later recalled – 5% of these were for valsartan and 1.4% for losartan. The impact of recalled irbesartan was negligible in this population. We observed an adherence increase of 1.6% from 2017 to 2018 among members filling drugs unaffected by the recalls, and a corresponding decrease of 0.8% among members impacted by the recalls. The difference suggests a -2.4% net adherence impact on patients taking recalled medications after accounting for the year-over-year adherence movement for unaffected members. Based on the total percentage of affected membership in 2018, we estimate an unadjusted population adherence impact of -0.14% resulting from medication recalls. This translates to 2,030 newly non-adherent members, and potentially significant expenses from medical events related to inadequate management of high blood pressure. 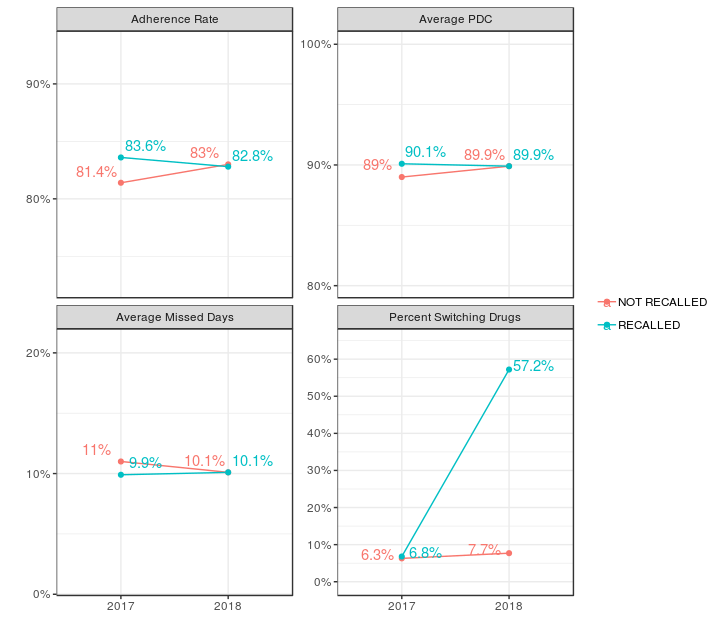 From 2017 to 2018, members affected by recalls also showed a small reduction in the average proportion of days covered (PDC) by their medication and an increase in mean total missed days as compared to unaffected members. By their last fill of 2018, 57% of patients who indexed on a recalled medication had switched to a different drug to control hypertension. Medication switching potentially increases healthcare utilization through additional physician encounters and further disrupts the lives of patients.4,5,6 Since many recalls occurred late in the year, we would expect more medication switching to continue into 2019.

Recalls of additional products containing valsartan, losartan, and irbesartan have extended into 2019, and the scale of these recalls has even led to medication shortages.7 We should anticipate continued recall disruption to patients’ usual medication regimens well into the current year. Under these circumstances, patient outreach remains especially vital to ensuring adherence to prescribed medications. Late in 2018, CMS released a call letter proposing an adjustment to Star ratings for contracts significantly impacted by “extreme and uncontrollable circumstances” such as hurricanes, wildfires, and other natural disaster events. An adjustment was considered if at least 25% of the member contract population reside within an impacted area.8 Given the growing number of hypertension recalls and the adherence rate differences measured in our study, it is possible that CMS may similarly address this soon.

These analytic results have limitations. We defined the cohort impacted by recalls using index fills only. This definition excludes members who may have been affected by the recalls after switching drugs mid-year; in 2018, 2.6% of the members we flagged as unaffected by recalls did in fact fill a recalled drug at some point in the year.  We also did not account for the timing of each recall. Many of the recalls occurred late in the year, when there is less opportunity to disrupt an annual population adherence rate.  Lastly, results are not adjusted for various individual-level demographic or clinical factors that may have impacted year-end adherence.

How does medication use impact 2021 Star Ratings?

Using our interactive tool, you can see the correlation between Star Ratings and medication adherence firsthand. Curious about how you stack up against similar plans? Set the measure-specific performance sliders to your plans’ Star Ratings to see how you compare.

CMS 2021 Star Ratings: What are the industry-level takeaways?